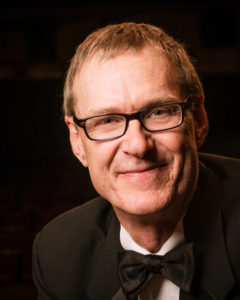 Don Matthews, bass, has a Bachelor of Music degree from Eastern Michigan University, earned a Masters in Vocal Performance from USC, and was a member of San Francisco Opera chorus. In 1998, he became the morning classical music host for Jefferson Public Radio and has been a voice teacher at SOU since 2002. Don has appeared in numerous productions with Rogue Music Theatre and with Camelot Theatre. He also appeared as a soloist with Rogue Valley Chorale, Siskiyou Singers, and Rogue Opera.