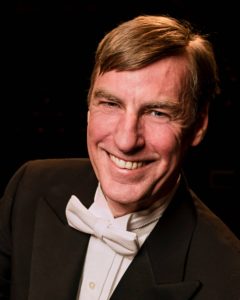 Dr. Paul French is Professor Emeritus of Choral/Vocal Studies at Southern Oregon University where he taught for 34 years and is the Music Director of Southern Oregon Repertory Singers. In recent years to much acclaim, Dr. French and Repertory Singers have brought world-class performances to audiences in the Rogue Valley in their annual series of concerts. Highlights of the series have been beloved choral masterworks, from the baroque period to the 20th century, as well as showcasing new music from living composers.

Dr. French’s practiced hands have also guided preeminent musical organizations including Rogue Valley Symphony, Rogue Opera, Jefferson Baroque Orchestra, and the Northwest Bach Festival. He was Chorus Master for the 2015 opening of the Britt Classical Festival with the stirringly epic “Carmina Burana,” as well as “Messiah” with Rogue Valley Symphony. Dr. French also directs the choir at Trinity Episcopal Church, Ashland, which is regarded among the top tier choirs in Oregon for liturgical music. 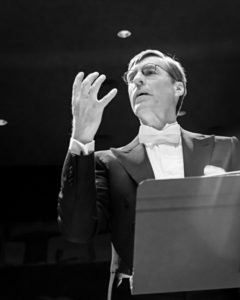 Equipped with extensive professional experience as a singer, conductor, and educator, Dr. French has led ensembles to noteworthy acclaim at prestigious six-state conventions, such as the American Choral Directors Association Northwest Convention (1994, 2002), the American Guild of Organists Northwest Convention (1997), and the Oregon Music Educators National Conference (2002, 2007).

Prominent artists and composers, including internationally renowned soprano Julianne Baird and revered composer Morten Lauridsen, have praised Dr. French and his ensembles for their “beautiful and inspiring” and “brilliant and superb” performances.  Willene Gunn, Director Emerita of the San Francisco Conservatory of Music Opera Program awarded further praise for the Repertory Singers’ West Coast Premier of Mozart’s “Mass in C Minor”, a performance she described as “measuring up to anything I have heard in any concert hall… anywhere.”

All Concerts are at the Southern Oregon University Recital Hall, S. Mountain Avenue in Ashland

Parking is free in the lot across the street.