Our Pianist and Composer in Residence, Jodi French 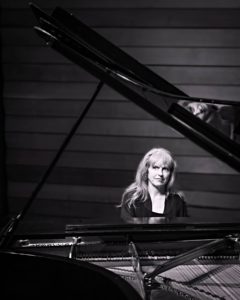 Born with an intrinsic fascination with sound and pitch, Jodi French has always found music to be both a joyful game and a thrilling challenge. By the age of three, her desire to play led her to the piano, the instrument she is most known for playing today. While her natural talents have earned her a proficiency with many instruments, she has always felt the piano to be the most apt for sharing emotion and telling stories.

While her mother taught her to read music, this was not enough for the young Jodi. Through her own insistence, she became equally adept at playing by ear as she challenged herself to play everything she heard in every possible key. This drive to continually challenge herself eventually gave her the skills to work as an accompanist when she was only ten years old. Later in life, Ms. French was privileged to study piano performance with Dr. Alexander Tutunov at Southern Oregon University. She continues to be deeply involved with the SOU Music Department as staff accompanist and informal coach, and by teaching piano class for beginners–one of her favorite activities.

Ms. French has given numerous solo performances, played recitals and concertos with other musical organizations in Southern Oregon, and  has had several of her sacred works published. Her original compositions have regularly been featured in the James M. Collier New Works Festival.

All Concerts are at the Southern Oregon University Recital Hall, S. Mountain Avenue in Ashland

Parking is free in the lot across the street.