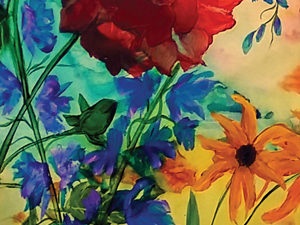 “A Sheen of Dew on Flowers” by English composer Joby Talbot is an hour-long cantata for choir, orchestra, and baritone and mezzo soprano soloists.

Mr. Talbot is an award-winning British composer who lives part of the year in Ashland and who has written extensively for film, ballet, and opera. His large-scale choral work, “Path of Miracles,” was enthusiastically received this past fall in a performance by the English choir, Tenebrae, at the SOU Recital Hall as part of Chamber Music Concerts’ series.

“Repertory Singers is thrilled to perform the second performance ever of ‘A Sheen of Dew on Flowers,’” says Dr. Paul French, Music Director.  The work premiered in London this past April, and the Repertory Singers’ performance will be the second in the world. Kelley O’Connor, who sang in the premier in London, will be the mezzo soprano soloist, and Theo Hoffman, “one of the most versatile and refined young singers of his generation,” will be baritone soloist.

The text for “A Sheen of Dew” is comprised of the writings of seven different women poets through the ages, and, although largely ancient, the poems seem modern in their depiction of the timeless universality of love. “Talbot’s music vividly captures these truths in vibrant music that is at once intimate and cinematic in scope,” relates Dr. French.

Other pieces featured on the program include the Rogue Valley premieres of music by Paul Mealor, Ēriks Ešenvalds, Will Todd, and two beautiful prayers for unity: “Tal vez temenos tiempo,”a stunning poem by Pablo Neruda, beautifully set to music by Tarik O’Regan; and a world premiere performance of “The Stranger Who Dwells Among You” by Repertory Singers’ Composer-in-Residence, Jodi French. Ms. French’s piece was commissioned by the Oregon Center for the Arts at Southern Oregon University for the SOU Chamber Choir who will join with Repertory Singers in a newly-composed version for strings, harp and the combined choirs.

Musicologist Ed Wight will facilitate a free audience question and answer session with composer, Joby Talbot, one hour prior to each performance. The Q&A sessions will take place on the Recital Hall stage.

For information on the composers and the pieces to be performed, click here toe see musicologist Ed Wight’s program notes .