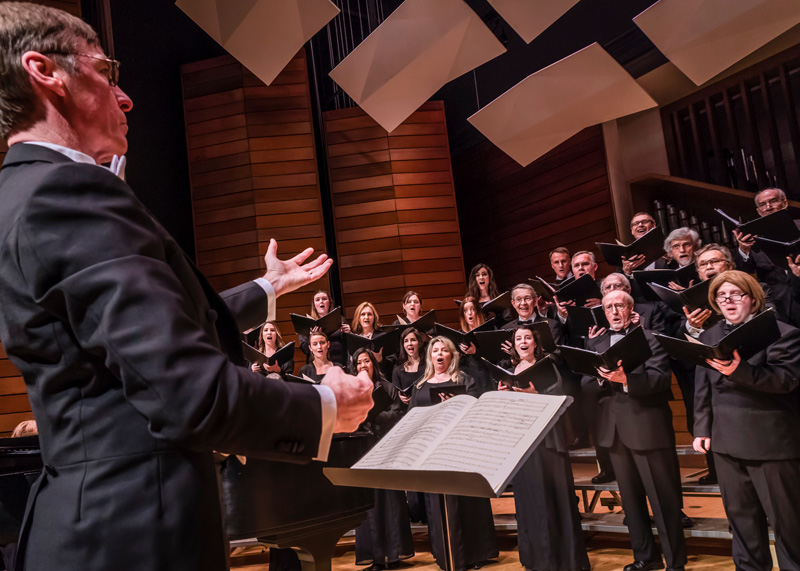 Choral conductor Paul French and the Southern Oregon Repertory Singers enjoyed a good rehearsal last weekend, and French is feeling well enough about their holiday concert that he won’t have to move to Tibet and change his name, he says.

“The weird thing about being a conductor is that you’re only as good as your last rehearsal,” French says with a laugh.

SORS’ 60-voice ensemble is filled with professional and semi-professional singers under the direction of French, director of choral and vocal studies at Southern Oregon University.

French and the Repertory Singers are gearing up for “Welcome Yule!,” a concert of festive music to greet the holiday season.

“We do holiday music,” he says, “and the majority of music written for the holidays is sacred, but we’re also doing “Jingle Bells,” a wassail carol, and the “Chanukah Fantasia,” which is a significant piece by young female composer Coreen Duffy. I try to do a big variety, especially during the holiday concert, because it’s important to audiences.

“We’ll do ‘Have Yourself a Merry Little Christmas,’ and I’ll pull out my portrait of Judy Garland,” he jokes — or does he?

Musicologist Ed Wight will discuss the composers and pieces to be performed one hour before each concert in Room 132 of the Music Building.

The selections of music at the top of the program juxtapose older composers with one born in 1963.

The concert opener is “Estampie Natalis,” or “Christmas Dance,” by Czech-American composer Vaclav Nelhybel, born in 1919.

“The estampie is one of the first couples dances in history,” French says. “Ours will be a faux-medieval setting dating back to the 12th century.”

“Hodie Christus Natus Est,” by German composer Heinrich Schutz, born in 1585, translates to “Today Christ is Born,” and “Puer Natus Est Nobis,” or “A Child is Born Unto Us,” was written by Swiss composer Ivo Antognini.

But what moves French is the piece that follows: Scottish composer James MacMillan’s “And Lo, the Angel of the Lord.”

“For me, it’s the most important piece in the program,” he says. “It portrays the angels appearing to the shepherds. It’s only four and a half minutes long, but it covers the whole gamut, and it’s pretty virtuosic, with sopranos and tenors singing at the top of their range in 15-part harmony. Then MacMillan has these not-of-this-world chords that are just hummed and sound like an audible halo. You hear this ‘voom,’ and it’s like you see the angel. The piece ends with the same gesture as if the halo is fading into the sky. Really quite magical.

“The mystery is the angels presenting themselves to the shepherds, and these are not even the A-list shepherds. These are the night-shift shepherds. These poor guys are sitting out in the cold and the angel appears. We all know the story, but if you think about it, it’s a pretty amazing moment.

“It’s my favorite setting of this text,” he adds. “I’m afraid I’ll be turned into a pillar of salt or something. Handel sets the same passage in ‘Messiah,’ but I think this is better. It’s more charming in Handel’s, while this one goes to the primary emotions you’d feel in that moment. Messiah’s ‘Glory to God’ is cute and happy, but I think if the angels were there, the music would be coming from all around. You’d be terrified, and there would be an intense sense of mystery. I think this piece captures all of that beautifully.”

This is French’s 28th year as a music director at SOU — his 84th quarter of teaching, he says. When he was in his 20s, he set out to be a singer, but his life took a different direction.

“I work with singers, and I help them to do their best,” he says. “That’s my contribution. Sometimes I sing, but not in SORS concerts. We have singers who are quite good, and my job is to give them opportunities.”

There are tons of solos in the concert, French says.

“We’re featuring 29 singers, some in smaller groups. It’s the most we’ve showcased at a concert. Almost half of the singers are featured in spots. Sherril Wood will accompany us on recorder, flute and piccolo in places, and Morgan O’Shaughnessey on violin and nyckelharpa in a Norwegian folk song by Ørjan Matre.

“We’ll be singing in Norwegian, God help us. But if you ask the choir what their favorite piece is, it’s probably this one. It’s folksy, fun and quite beautiful. More like a folk ballad, it’s fun for the choir to use different sounds. I’m a strong believer that good singers can change their sound from piece to piece to serve the music.”

Also look for Jodi French, SORS composer-in-residence, who has written an arrangement of a carol, “Masters in This Hall,” for the choir. It’s arranged for the instruments accompanying the singers.

“I asked Jodi for a big, brilliant first-half closing piece,” French says. “She loves to write music. She’s so good at everything, it’s kind of annoying really. She’s this fantastic pianist and plays six or seven instruments quite well. Her composing thing is just taking off, and people love, love her music.”

The North Medford High School Chamber Choir will perform “Rorate Caeli” at the show before singing along with the Repertory Singers for a couple of numbers, and several singers from French’s university choir sing with SORS year-round, including a student quartet that is among the paid core singers.

Other standouts in the show include Philip Lawson’s delightful arrangement of “Jingle Bells.” He passes through a variety of styles and reharmonizes the refrain — all with tongue firmly in cheek. French chose composer Todd Smith’s “Noel,” set to lively African singing and drumming, to close the show.

“It’s a tremendous variety of music from all different styles,” French says. “And pieces that audiences have not heard SORS perform. I’ve never conducted the Shutz, I’ve never done the Antognini, the Norwegian piece, ‘Sommerset Wassail,’ ‘Hush My Dear,’ the ‘Welcome Yule’ by Charles Parry, ‘Chanukah Fantasia,’ or Lawson’s ‘Jingle Bells.’ So the music will be new, interesting and beautiful.”